Not only did a Hurricane blow through this week, but so did Halloween! Luckily, Sandy swept in and out just in time for a cool, fall night for the kiddos to do some trick or treating.  And this guy got to hand out lots of candy… 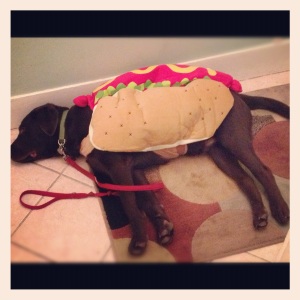 I was trying to find the perfect Halloween dinner (hot dogs were off limits) and I went through lots of pumpkin/squash/fally’ type entrees.  But then, for some reason, short ribs popped into my head, followed by tacos. So boom – Short Rib Tacos it was!  I investigated a variety of different recipes, but this one from So Tasty, So Yummy sounded like the best flavor combination to me.  I took the base of it, added a little of this and a little of that, and I don’t often throw rose petals at myself, but Halloween night, it was a shower of rose petals, because man were these good! We paired them with those delicious Pickled Red Onions from the Southwestern Pulled Brisket Taco recipe, some cilantro and fresh homemade salsa, and oooh it was a Halloween dinner to remember!

Short Rib Tacos
*Adapted from So Tasty, So Yummy

1 – 14.5 oz can regular diced tomatoes
(I used the basil flavored but I don’t think it matters – if you wanted to kick up the heat, you could probably use 2 cans of the tomatoes w/ chilis)

1) Mix the salt, pepper, cumin, chili powder and garlic powder in a bowl.  Rub each short rib in the spice mixture and place them in a large ziplock bag.  Let marinade in the fridge for at least an hour (obviously, the longer the better! I think I did mine for about an hour and a half)

3) In a large dutch oven (or heavy pot) heat 4 tbsp. olive oil.  Brown each short rib on both sides and then set aside on a plate.

4) To the same dutch oven, add the chopped onions and saute until translucent (about 3-4 minutes). Then add the garlic and chili flakes and saute another minute, or until fragrant.

5) Add the beef broth, lime juice and black bean/tomato puree to the garlic and onion mixture, scraping the brown bits from the short ribs.  Return the browned short ribs to the dutch oven in a single layer and let come to a boil.

6) Reduce heat to low and cook the short ribs on low heat for up to 4 hours, depending on how much time you have (the longer cooked, the more tender the meat).  After about an hour and a half, shred the short ribs and return the shredded meat back to the sauce to soak in the flavor.  If they’re on a bone, the meat can be removed from the bone and shredded, or if they’re boneless, you can just shred the meat.

7) Be sure to reserve some of the sauce from the short ribs and reduce it for 10-15 minutes before serving.  It’s a great little accompaniment to the tacos!

Serve the short ribs on corn or flour tortillas with the reduced sauce, some salsa, queso fresco and cilantro. Mmmmmmm.

Hope everyone had a happy and safe Halloween!

Sunday nights are pretty brutal – not only is your weekend over, but in like 12 hours, you’ll be starting another work week – a 5-day one at that.  Ick.  AND when you realize that you are not in fact $540 million dollars richer, as you had intended to be when you returned to work on Monday, well it’s just that extra punch in the stomach.

BUT a delicious Sunday dinner can make all the difference in the world, and let me tell you, this short rib recipe I found on Eat Yourself Skinny did NOT disappoint.  Ironically though, it’s not exactly a skinny recipe haha.  Leave it to me to go to a healthy blog and find the one non-good for you recipe they have.  But I figured a) it’s the last night of the weekend and b) we didn’t win the lottery, so Dave and I deserve a special treat 🙂

So here it is kids – Slow-Cooked Short Ribs – a meal that takes 8-9 hours to be ready, but is worth the wait, so much so that Dave had seconds! He never does that! It’s got a little bite to it, but it’s sweet at the same time – paired with Garlic Mashed potatoes and grilled asparagus, I don’t mind the food coma feeling this Monday morning.  The only part I left out was the Worcestershire sauce.  You know when you imagine something in your cabinet and then you go to get it and it’s not there? Yeah, that was the W. sauce for me – still amazing flavor though, and I’m sure the W. sauce would enhance it even more.

I wish I could do this to my thighs 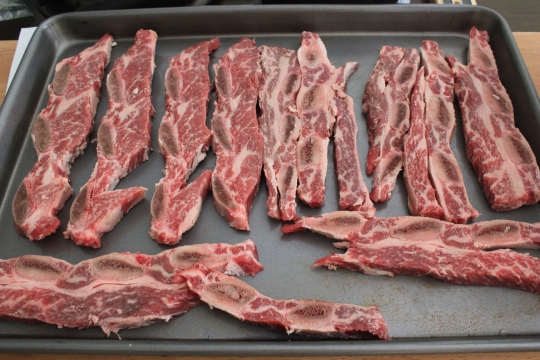 Lookin’ good short ribs! You guys been workin’ out?

2)  Add all ingredients together in a large mixing bowl, except short ribs. 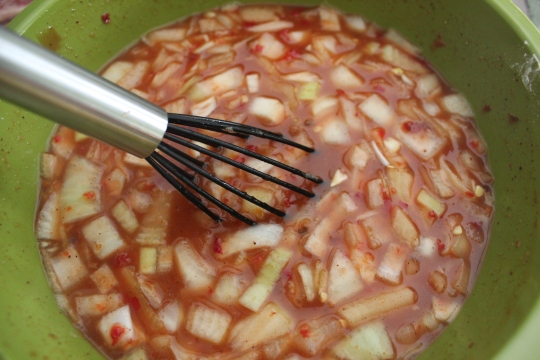 3) Arrange short ribs in the slow cooker and pour the mixture of ingredients over the short ribs.